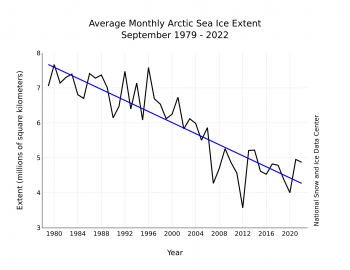 Mid-September is when the Arctic Sea Ice Extent (SIE) hits its minimum. The average SIE for the entire month is compared
with the average SIE in all other Septembers since the satellites have been monitoring the icepack (1979). SIE is volatile, and bounces around a lot
due to wind, current and local weather, but I believe this metric gives us a good idea what is going on at the N Pole over time.

The SIE is the number of square kilometers of the Arctic Ocean covered by at least 15% ice. That number has gone (according to the the blue linear regression line)
from 7.6 to 4.4 million sq km in the last 43 years. That’s over 74,000 sq km per year.

At this rate, the North Polar Basin will be completely ice-free in summer by 2081. That’s assuming, of course, that the rate of ice loss remains constant…