February 22, 2021 | Six decades after its discovery, the first black hole ever detected is still causing astronomers to scratch their heads. It turns out that the cosmic behemoth at the heart of the Cygnus X-1 system is 50% more massive than previously thought, making it the heaviest stellar-mass black hole ever observed directly. 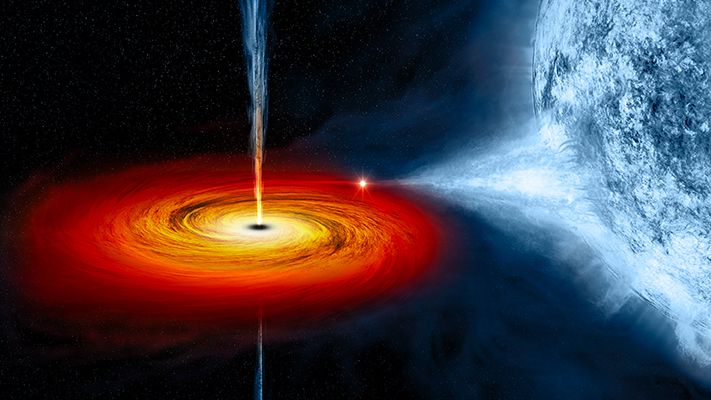 Based on new observations, an international team of researchers estimate the black hole is 21 times the mass of our sun and spinning faster than any other known black hole. The recalculated weight is causing scientists to rethink how bright stars that turn into black holes evolve, and how fast they shed their skins before they die.

The mass of a black hole depends on the properties of its parent star, such as the star’s mass and its metallicity (how much of it is made up of elements heavier than helium). Over a star’s lifetime, it sheds its outer layers through blasts of stellar winds. Bigger stars rich in heavy elements shed their mass faster than smaller stars with less metallicity, scientists think.

“Stars lose mass to their surrounding environment through stellar winds that blow away from their surface. But to make a black hole this heavy and rotating so quickly, we need to dial down the amount of mass that bright stars lose during their lifetimes,” study co-author Ilya Mandel, an astrophysicist from Australia’s Monash University said in a statement.