February 23, 2021 | A ghostly particle that smashed into Antarctica in 2019 has been traced back to a black hole tearing apart a star while acting like a giant cosmic particle accelerator, a new study finds.

Scientists investigated a kind of subatomic particle known as a neutrino, which is generated by nuclear reactions and the radioactive decay of unstable atoms. Neutrinos are extraordinarily lightweight — about 500,000 times lighter than the electron. 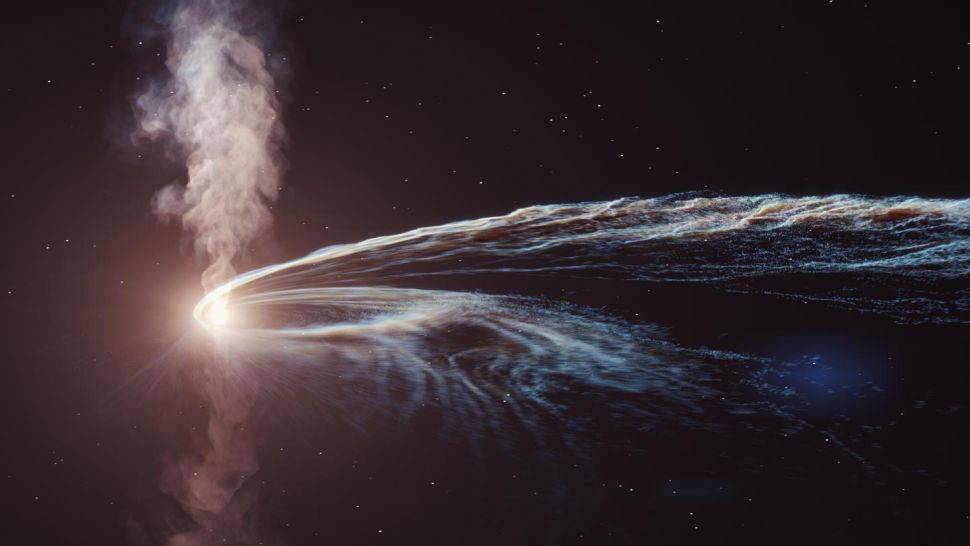 After the supermassive black hole in the galaxy 2MASX J20570298+1412165 tore apart the star, roughly half of the star’s debris was flung into space, while the remainder formed a glowing accretion disk around the black hole. (Image credit: DESY Science Communication Lab)

Neutrinos possess no electric charge and only rarely interact with other particles. As such, they can slip through matter easily — a light-year’s worth of lead, equal to about 5.8 trillion miles (9.5 trillion kilometers) would only stop about half of the neutrinos flying through it.

However, neutrinos do occasionally strike atoms. When that happens, they give off telltale flashes of light, which scientists have previously spotted to confirm their existence.

In the new study, researchers examined an extremely high-energy neutrino they spotted on Oct. 1, 2019, using the IceCube Neutrino Observatory at the South Pole.