Earth’s Mountains Disappeared for a Billion Years, and then Life Stopped Evolving
A dead supercontinent may be to blame.
By Brandon Specktor | Live Science Senior Writer

February 11, 2021 | Earth, like so many of its human inhabitants, may have experienced a mid-life crisis that culminated in baldness. But it wasn’t a receding hairline our planet had to worry about; it was a receding skyline.

For nearly a billion years during our planet’s “middle age” (1.8 billion to 0.8 billion years ago), Earth‘s mountains literally stopped growing, while erosion wore down existing peaks to stumps, according to a study published Feb. 11 in the journal Science. 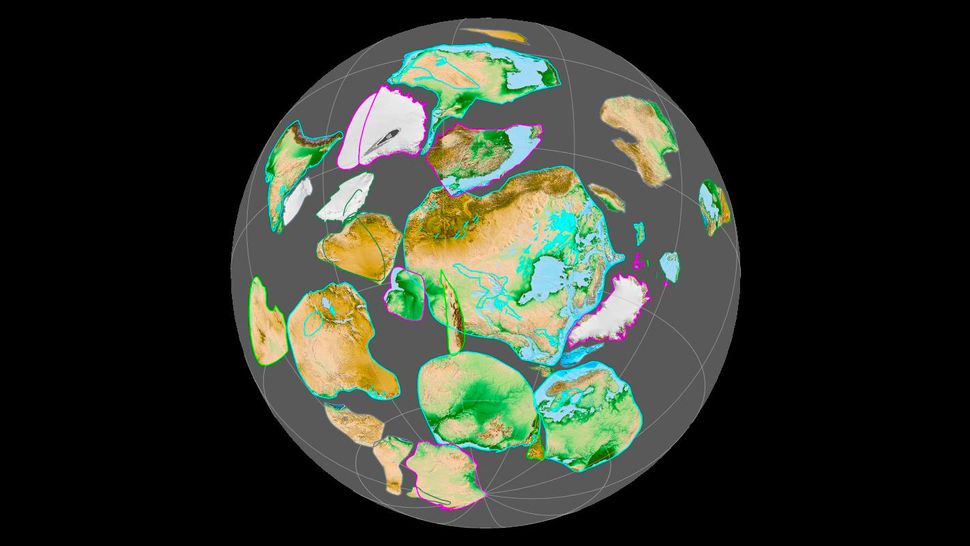 The supercontinent of Nuna-Rodinia broke up at the end of the Proterozoic era, ending a billion years of no new mountain formation, a new study says. (Image credit: Fama Clamosa/ CC 4.0)

This extreme mountain-forming hiatus — which resulted from a persistent thinning of Earth’s continental crust — coincided with a particularly bleak eon that geologist’s call the “boring billion,” the researchers wrote. Just as Earth’s mountains failed to grow, the simple life-forms in Earth’s oceans also failed to evolve (or at least, they evolved incredibly slowly) for a billion years.

According to lead study author Ming Tang, the mountain of trouble on Earth’s continents may have been partially responsible for the slow going in Earth’s seas.

“Continents were mountainless in the middle age,” Tang, an assistant professor at Peking University in Beijing, China, told Live Science in an email. “Flatter continents may have reduced nutrient supply [to the ocean] and hindered the emergence of complex life.”

More:
When mountains vanish
The eon of nothing