Intriguing Dark Streaks on Mars May Be Caused by Landslides After All
Subsurface chemistry could be driving the landslides.
By Charles Q. Choi | Space.com and Live Science Contributing Writer

February 3, 2021 | Martian landslides might help explain mystery lines seen on the surface of the Red Planet, a new study finds. 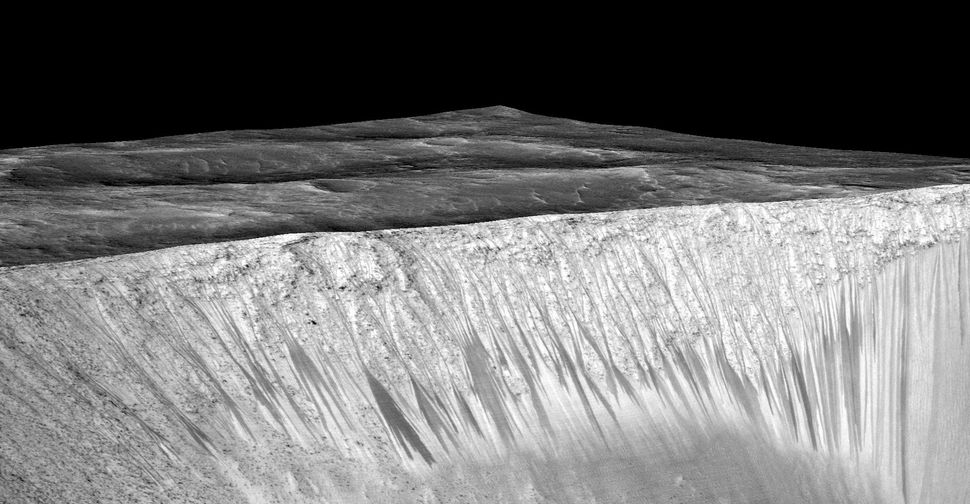 The cause of the dark streaks on some Martian slopes known as recurring slope lineae, imaged here by NASA’s Mars Reconnaissance Orbiter, is a topic of considerable debate. Some scientists think temporary surface flows of salty water are responsible, and others consider landslides a more likely explanation.
(Image: © NASA/JPL-Caltech/Univ. of Arizona )

For years, scientists analyzing the Martian surface have detected clusters of dark, narrow lines that seasonally appear on steep, sun-facing slopes in the warmer regions. Previous research has suggested that these enigmatic dark streaks, called recurring slope lineae (RSL), are signs that salty water regularly flows on the Red Planet during its warmest seasons.

Recent missions to Mars have revealed that the planet does possess huge underground pockets of ice. Prior work suggested that warmer temperatures during the Martian spring and summer could help generate salty brines capable, at least for a time, of staying liquid in the cold, thin air of the Red Planet.