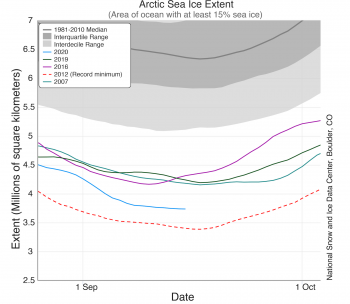 This is only the second time in the 40 years we have had satellite monitoring of sea ice that the minimum dropped below 4 million sq kilometers.

In the first week of September, sea ice extent took a sharp downward turn, exceeding the pace of decline for any previous year during that period, and placing the 2020 sea ice minimum firmly as second lowest—after 2012—in the 42-year continuous satellite record. Pulses of warm air from north-central Siberia are responsible for the late downward trend. Sea ice decline has slowed in the past few days, and the annual minimum is imminent.