SPACE.COM – May 4, 2020 | Scientists have gotten their best look to date at three chaotic patches on the icy surface of Jupiter’s moon Europa thanks to decade-old images from a long-defunct spacecraft.

NASA’s Galileo spacecraft spent eight years touring the Jupiter system, between 1995 and 2003, and during that time it made 11 flybys of the icy moon Europa. On Sept. 26, 1998, during one such maneuver, Galileo captured particularly detailed black-and-white images of the moon’s crackled surface. Now, scientists have revisited those images to prepare for future missions to the intriguing world. 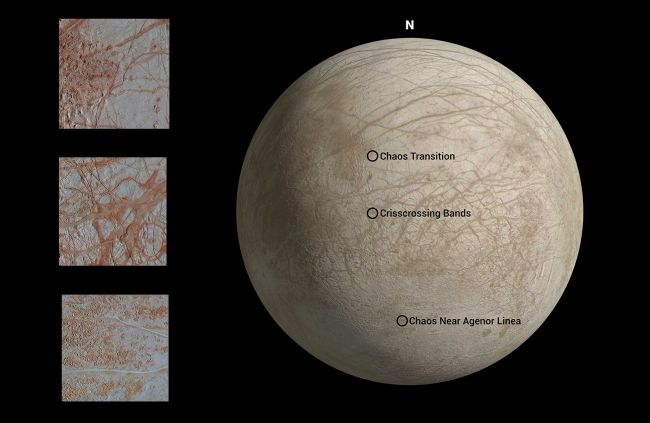 “We’ve only seen a very small part of Europa’s surface at this resolution,” Cynthia Phillips, a planetary geologist at NASA’s Jet Propulsion Laboratory in California and Europa project staff scientist working on future missions, said in a statement. “Europa Clipper will increase that immensely.”

Europa Clipper is a new NASA mission targeted to launch in in 2023 or 2025 and make 45 passes over the moon. During that time, it will study Europa’s thin atmosphere, icy surface, hypothesized subsurface ocean and internal magnetic field, giving scientists their first look at the moon since the Galileo mission.

To prepare for the new mission, scientists are trying to squeeze all the information they can out of Galileo’s data — and that’s where the reprocessed images come in. During the 1998 flyby, Galileo was able to capture images that showed surface features just 1,500 feet (460 meters) wide.