Home » Mysteries of the Multiverse
A primer of systems engineering - fishing with dynamite. May 1, 2020 10:50 am hank

Systems are often judged by their degree of efficiency. This is particularly the case with politico-economic and social systems, where the criterion of success is the maximum output for the minimum input. Like a corporate farm, “maximizing productivity” is the watchword, and simplicity is the key.

But natural systems are best judged by their robustness, that is, their ability to recover from severe external stress and to synergistically interact with the existing environment. A rain forest is the guiding example here, severe variations in rainfall, climactic change, etc are responded to by rearranging pathways within the system itself so that the new conditions are managed and their ill effects absorbed and dispersed. It is possible to greatly increase productivity by aggressively exploiting an environment, but the result is an unstable enterprise unable to handle stress. Consider how natural systems respond to external attack; alternative responses and internal shifts maintain system integrity. Rain forests do not have the ability to produce high outputs or surpluses, but they can absorb considerable punishment before breaking down.

Consider how modern economies and political systems are now responding to external stresses, such as the Coronavirus pandemic. Our desire to make them as efficient and productive as possible has resulted in systems incapable of responding to even minor amounts of unanticipated change.

Consider further how previous societies in history managed to survive massive microbial attacks, plagues and epidemics (aggravated by their own primitive ideas about sanitation and public health). The Black Death at the end of the Middle Ages was worldwide, wiped out a third of the population of Europe, and was dealt with by superstitious societies without the slightest knowledge of their causes or cures. The Plague came back, multiple times over the next few centuries, yet civilization not only survived, it flourished in the Renaissance.

In social systems, robustness and efficiency, versatility and performance, are often antithetical; you can’t have both. At best, as in engineering systems, some combination of the two may be the optimum design criterion. And if we limit our accounting to only one parameter, such as energy, we may be deluded into squandering all the others, such as matter, space or time.

I suspect our own economic systems, designed to generate the maximum profit from the minimum investment, are dangerously inadequate to deal with the real world. To borrow a concept from the biological sciences, they are, like the Birds of Paradise, over-specialized.

This is a Darwinian moment, and if one thinks of it in those terms, our prospects are not only dim, they get worse every day. 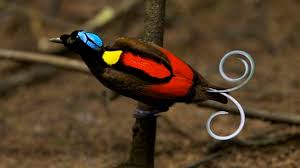