SPACE.com – April 7, 2020 | A proposal to land the Apollo lunar module on the reverse side of a new $1 coin has been waved off by the committees reviewing the design.

The historic moon lander was among the three subjects considered for New York’s dollar in the U.S. Mint’s American Innovation coin program. Launched in 2018, the multi-year series honors innovations or innovators from each of the 50 U.S. states, Washington, D.C. and the American-owned territories. 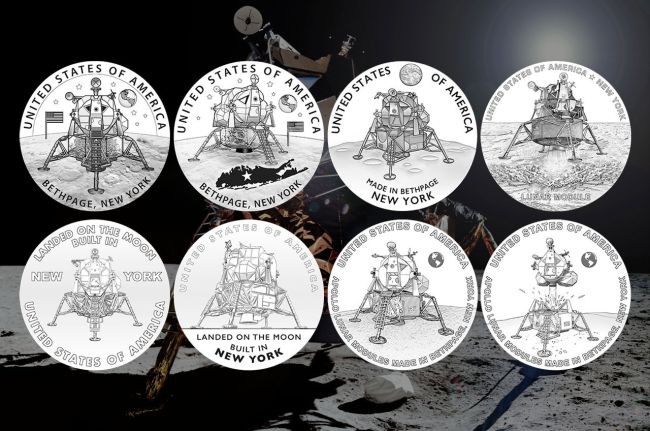 The Apollo lunar module, which landed 12 astronauts on the moon between 1969 and 1972, was designed and built for NASA by Grumman Aircraft (today Northrop Grumman) at the company’s facilities in Bethpage, New York.

“A total of 13 lunar modules were built in New York, and six made lunar landings. All of them bear a nameplate reading, ‘Made in Bethpage, New York,’” April Stafford, director of the U.S. Mint Office of Design Management, told the members of the Citizens Coinage Advisory Committee (CCAC) during a March 11 meeting.

“The moon landing[s] could not have happened without the lunar module,” said Stafford.