Mobile Astronomy: Put the Milky Way in Your Pocket with ‘Our Galaxy’ Smartphone App
By Chris Vaughan

From time to time at star parties, I encountered someone who isn’t very impressed with the dim, fuzzy object I’m showing them through my telescope. But once I explain what the object is, how far away it is, and how it connects to our place in the galaxy and the wider universe beyond, it sparks their imagination and they look at it again with renewed interest and appreciation. A new fun and educational app called Our Galaxy will let anyone learn about our place in the cosmos, and feel that sense of wonder. 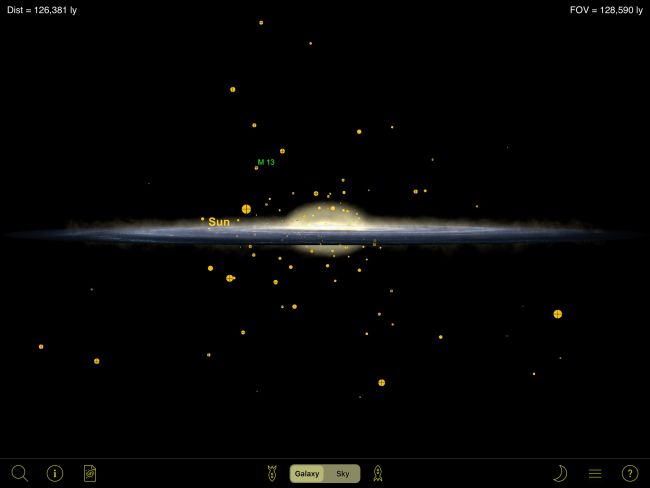 The new Our Galaxy app contains thousands of deep-sky objects that can be displayed in their true locations within our home galaxy, the Milky Way, and viewed from any perspective. This view shows how globular clusters, densely packed balls of ancient stars, orbit the galactic core like bees around a hive. M13 is a bright globular cluster that is easily visible in backyard telescopes during the summer months. (Image credit: Otherwise.com)

In addition to the obvious bright planets and stars, the night sky is sprinkled with star clusters, nebulas, and distant galaxies, many of which are revealed by looking through binoculars and backyard telescopes. Astronomers refer to those exotic objects as deep-sky objects. Their positions in the sky aren’t completely random. Star clusters and nebulas populate the spiral arms of our home galaxy, the Milky Way — with more of them occurring closer to the center of the galaxy and fewer of them appearing along its outer rim. Their locations in the sky allow astronomers to trace out the structure and dimensions of our galaxy, and to determine where new stars are being formed within it.