Today in Trump:"I’ve done more for Black Americans, in fact, than any President in U.S. history, with the possible exception of another Republican President, the late, great, Abraham Lincoln...and it’s not even close." RL June 3, 2020 7:34 am (CurrentEvents)

Some in the armed forces take their oath seriously RL June 2, 2020 9:50 pm (CurrentEvents)

"Let me be clear: The President just used a Bible, the most sacred text of the Judeo-Christian tradition, and one of the churches of my diocese, without permission, as a backdrop for a message antithetical to the teachings of Jesus" RL June 1, 2020 10:21 pm (CurrentEvents)

Well the data for the August polar melt is in, and as we can see by comparing it to previous Augusts, the trend for ice loss of the last few years is still evident. 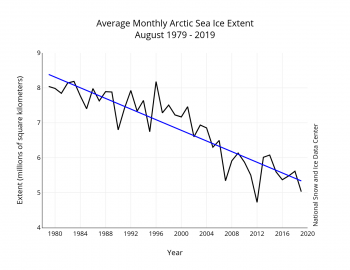 Still it is clear, that a breaking of the 2012 low ice record, or even the 2nd place 2007 record may not occur this year. Then again, the precipitous drop in SIE halted, but it looks like it is starting to resume its fall again! I guess we’ll have to wait til mid September to see how this year stacks up. The September wrap-up will be released in early October, and I will post it here.. 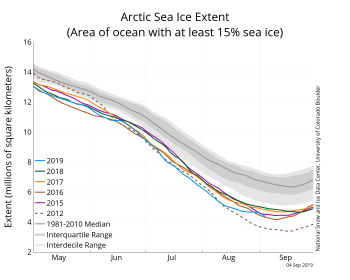 For a detailed analysis of polar ice conditions, please refer to nsidc.org for details, with numerous graphs, data and other supporting information.

Here is their summary:

Summer’s not over until bottom melt ends
September 5, 2019
While Arctic sea ice extent was tracking at record low levels in July and August, the pace of ice loss slowed considerably after the middle of August, despite above-average air temperatures over much of the Arctic Ocean. By August 14, extent started tracking above levels observed in 2012, resulting in the second lowest August extent in the satellite record. Although Arctic air temperatures are now falling below freezing, sea ice loss will likely continue for several weeks as heat stored in the ocean melts the underside of sea ice. Winds can also compress the pack further reducing sea ice extent. As of this post, the rate of sea ice loss has sped up again.
…
By August, the sun hangs low on the horizon in the Arctic, air temperatures drop below the freezing, melt ponds begin to freeze, and the first snows fall. It seems as though summer is over, but it is not. Even though surface melting has largely ended, there still is ample heat remaining in the ocean and the bottom of the ice is still melting. Colleague Don Perovich discussed these issues at the International Glaciological Society: Sea Ice at the Interface meeting, held August 18 to 23, 2019 in Winnipeg, Canada. Surface melting peaks in July and usually ends in mid-August. By contrast, bottom melting peaks in August and often continues into September or October (Figure 4a). This is supported by observations in regions with early sea ice retreat like the Chukchi, Bering, Laptev, and Kara Seas, where sea surface temperatures were 5 degrees Celsius (41 degrees Fahrenheit) or higher on August 25 (Figure 4b).